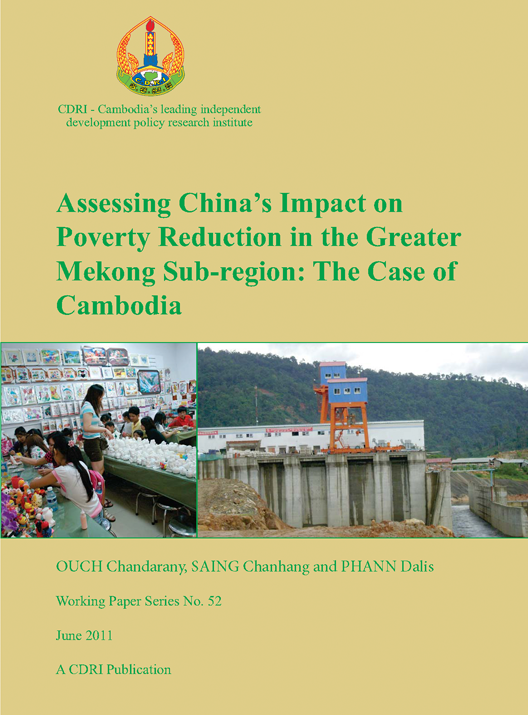 Assessing China’s Impact on Poverty Reduction in the Greater Mekong Subregion: The Case of Cambodia

The deepening trade relation between Cambodia and China has brought about significant expansion of bilateral trade between the two nations; however, Cambodia’s negative trade balance continues to widen at an average annual growth rate of 34 percent. The study uses the framework developed by Jenkins and Edwards (2004) to examine China-Cambodia trade and its implications for poverty reduction in Cambodia through three specific dimensions, namely export to China, import from China and export to the third market.

The pattern of export shares between 1992 and 2008 has changed noticeably. The share of labour-intensive agriculture dropped substantially from 51.4 percent in 1992 to 9.1 percent in 2000 and then rebounded to 29.6 percent in 2008. There was also evidence of a spike in export shares of live animals and fish between 2000 and 2008. Labour-intensive textiles and garments’ share of export to China also showed a marked upward trend from 3.2 percent in 1992 to 28.2 percent in 2008. The rising shares of the two product groups would certainly have contributed to poverty reduction in Cambodia provided that they also generated significant employment.

Data on import from China show a small and declining share of labour-intensive agriculture products between 1992 and 2008. It appears that competition between the two countries in domestic agriculture markets is unlikely. Some of the imported products, which are not of Cambodian specialisation, are complementary. However, the regular and constant rise in the import share of certain products in this category, albeit small, could pose potential competitive threat to Cambodian producers in the future. More importantly, the substantial jump in the import share of labour-intensive textiles and garments between 1992 and 2008 does not compete with the domestic market provided that the products are assembled for re-export to third markets. The rising import share of said products appears to contribute to employment creation in Cambodia, thereby having a positive poverty effect, but it hinders the development of domestic backward linkage industries in the domestic economy.

In terms of consumer gain, data show that the import share of pro-poor consumer goods increased between 1992 and 2000, but then declined between 2000 and 2008. This indicates that poor consumers’ gain from the import of cheap Chinese consumer products abated slightly during the second half of this period, making it less likely that the import of pro-poor products from China contributes to poverty reduction in Cambodia. Pro-poor products that have been imported regularly include fish, cereal, vegetables, fruit, beverages, apparel and worn clothing.

Analysis of export to the third market reveals that Cambodia and China could be competitors in manufactured goods, but not agricultural products. Further examination of the top 12 garment exports to the US and the EU shows that there is potential competition with China in the US market, but not in the EU market given Cambodia’s tiny 0.01 to 10 percent market share. Among the 12 products in the US market, China’s declining share and Cambodia’s rising share of knit/crochet apparel (SITC 8459) creates opportunity for domestic suppliers, while the steep rise in China’s market share of the remaining products could pose potential threat to producers in Cambodia. This could have negative implications for poverty alleviation in Cambodia.

In line with the analysis of China’s trade, the poverty effects of Chinese investment in Cambodia are also investigated by applying Jenkins and Edwards’s (2004) framework. Labourintensive foreign direct investment (FDI), which is important for poverty reduction in its role as a major generator of employment in Cambodia, is examined. A case study on the garment sector, which is greatly attractive to investment from China, looks at the impact of China’s investment in Cambodia through: i) increased earnings of the rural poor through employment creation and higher wages; ii) remittance; and iii) skill development of the rural poor.

The case study shows to some extent that Chinese investment in the Cambodian garment sector has contributed to poverty reduction by creating employment for rural people. A survey of 300 garment workers was conducted in Phnom Penh (150 from Chinese and 150 from non- Chinese owned factories). The survey indicates that 70 percent of the total interviewed workers were previously self-employed, 45 percent of whom are presently employed in the selected Chinese owned factories. Garment workers in both Chinese and non-Chinese factories earn on average around USD80 per month or USD2.67 per day (USD2.03 per day at 2006 prices), which is higher than the overall poverty line in Phnom Penh of USD0.76 per day (USD0.71 per day at 2006 prices). Workers’ remittance is used for household daily food consumption (64 percent), as well as for investing in agriculture, paying debt and saving for children. In terms of skill development, neither the Chinese nor the non-Chinese factories appear to have clear training programmes. Only two of the interviewed workers (employed in a Chinese factory) had been offered training – in new design and labour law.

In sum, Chinese investment in the garment sector has considerably contributed to poverty reduction in Cambodia by providing employment opportunities and income generation for the rural poor.

The impacts of China’s official development assistance on poverty reduction are assessed through two case studies on China funded projects in the transport sector: the Rehabilitation of National Road No 7 from Kratie to Trapeang Kriel (a border-crossing to Laos) and the Construction of the Prek Tamak Bridge in Kandal province. The main focus of the case studies is to assess the likely impact of each project on local people’s livelihoods and local communities’ social development, primarily based on local people’s perspectives. The new road and bridge built under the China disbursement projects have provided the villagers with more positive than negative benefits. The opportunity of growing more crops and better access to market has improved their quality of life. They have easier access to more education as well as better healthcare services, can travel further to find work and learn about the outside world from going to the provinces or Phnom Penh city. Conversely, the villages can be reached more readily by development agencies which could bring social services to the areas as well as help in managing forest resources. In short, both projects have brought more livelihood options for local people. 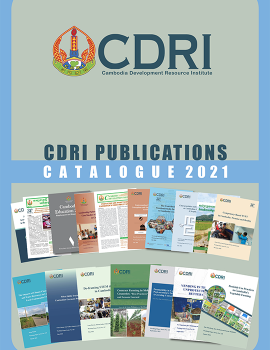 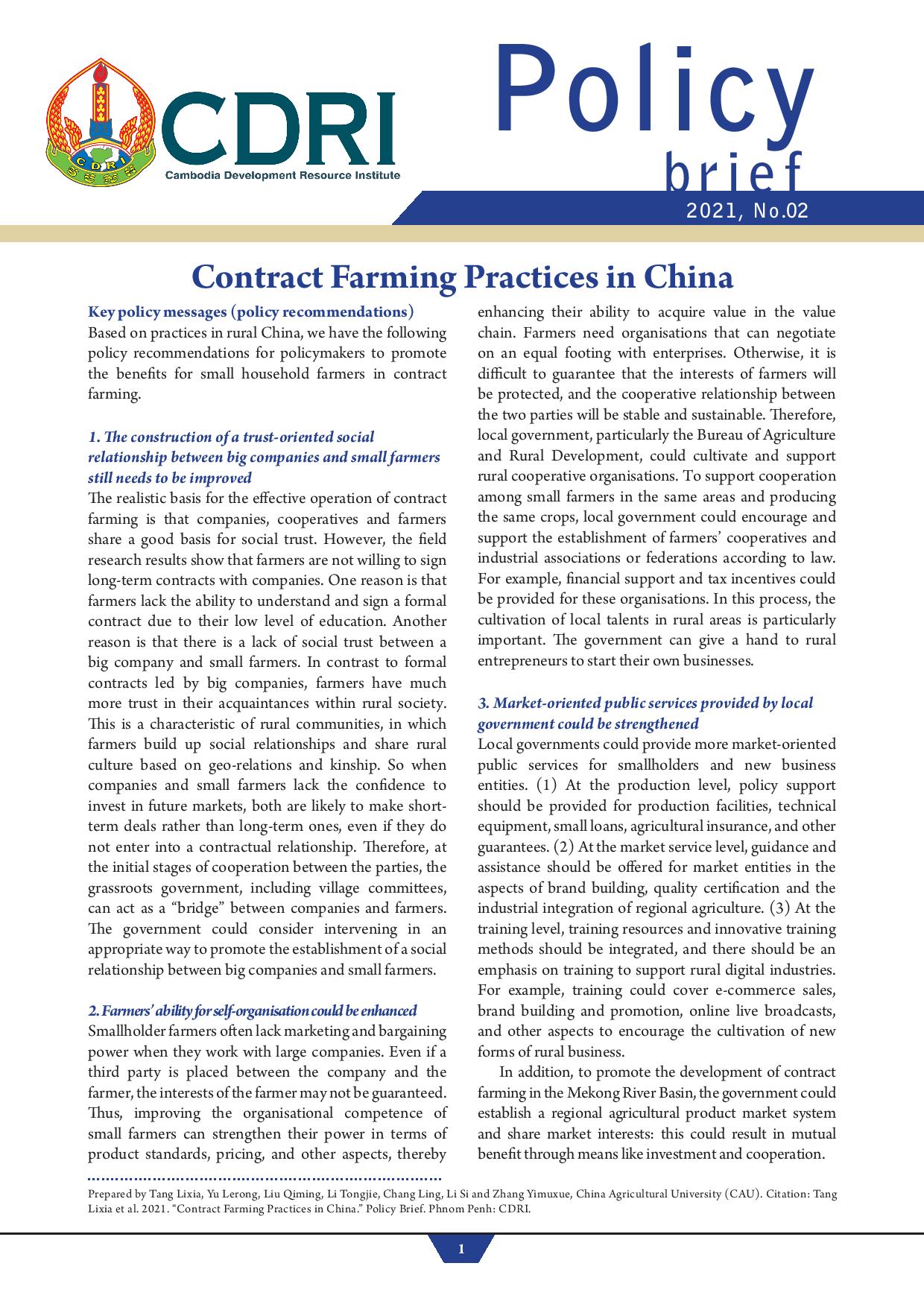 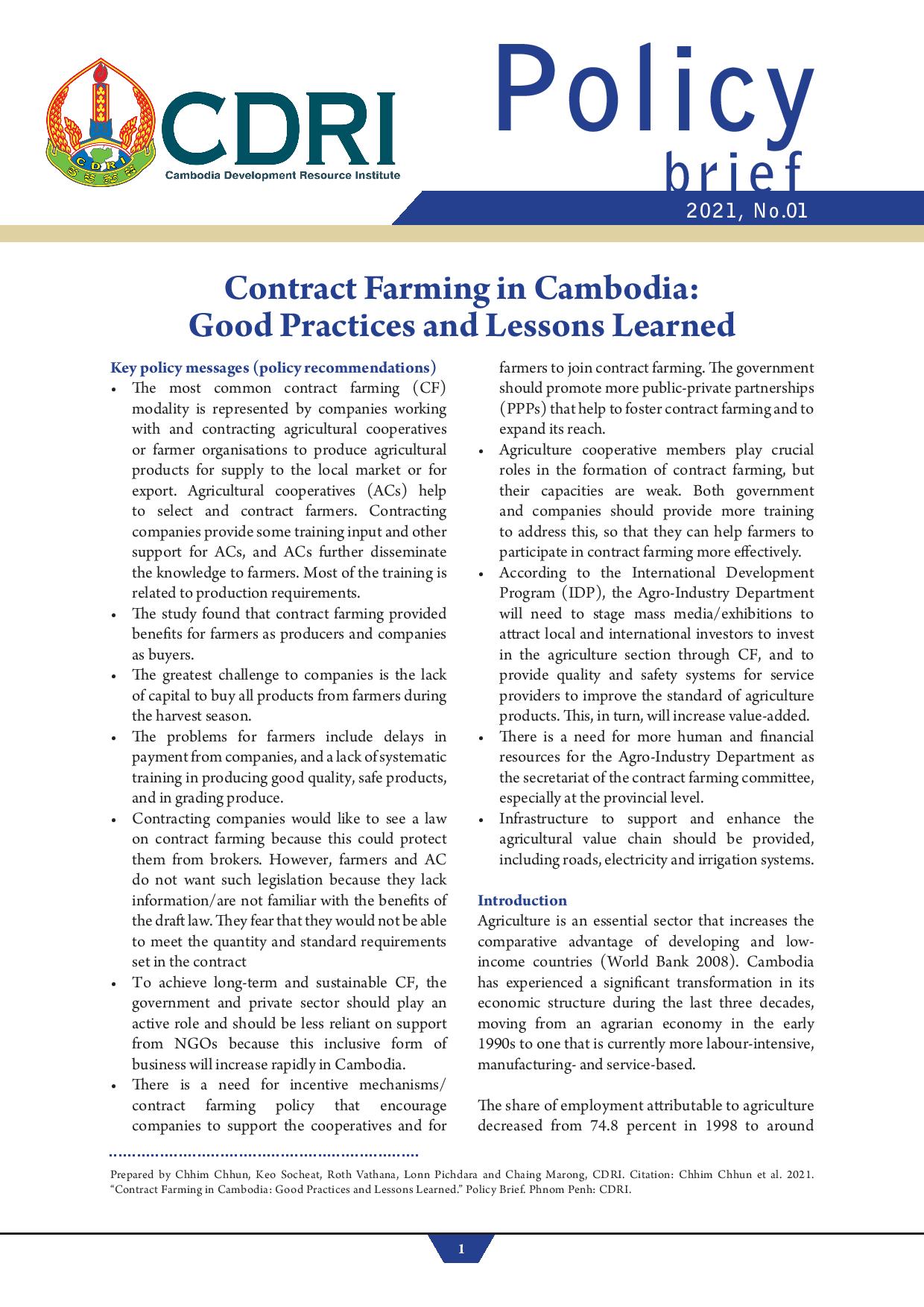